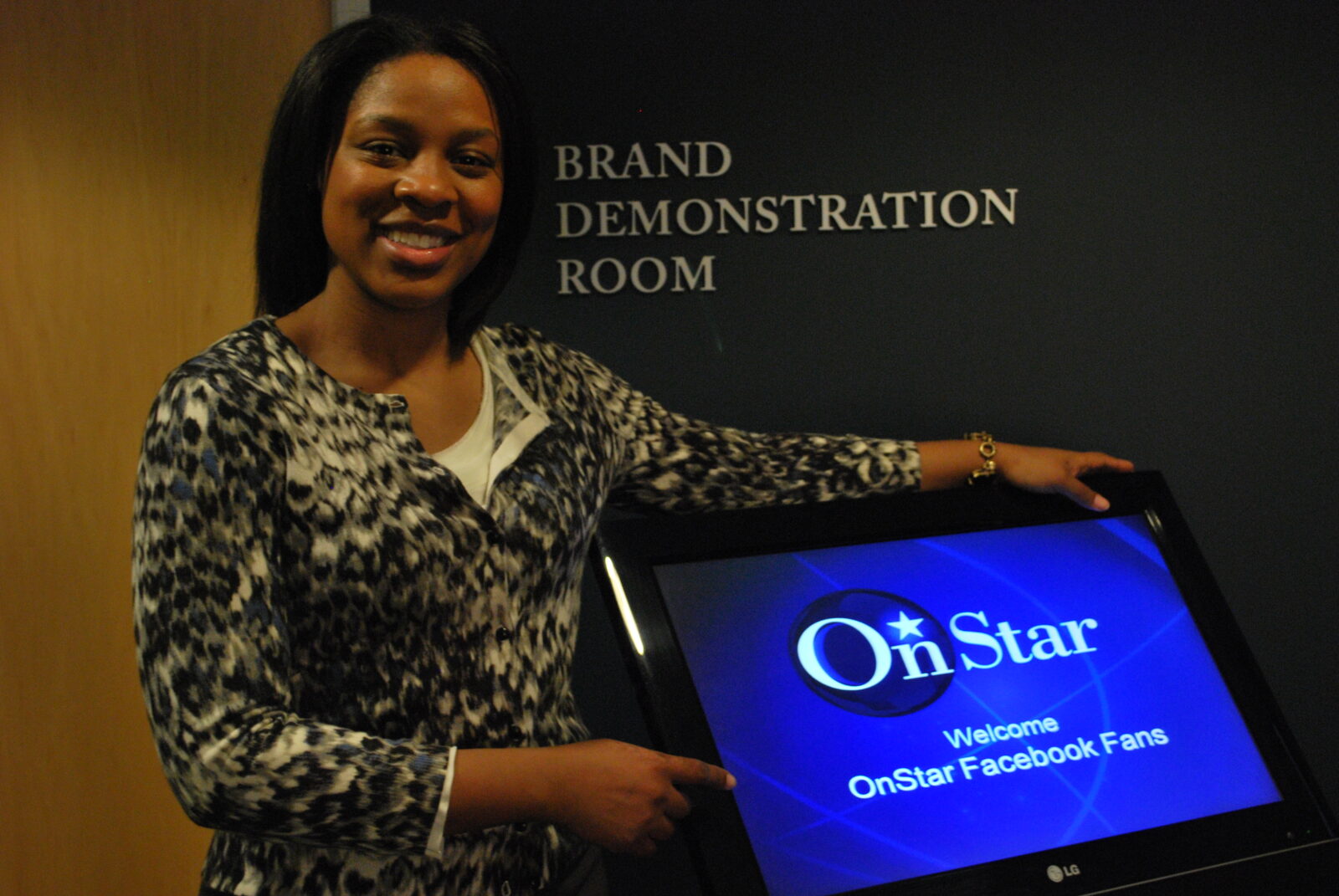 Last night I visited the OnStar Command Center. I was just a tad bit excited but I think I managed not to embarrass myself. Except for being so smitten with my surroundings that I didn’t see the gift on the seat and sat on it – several times – before noticing it. Doh.

The group I was attending with had been invited for a tour through OnStar’s Facebook Fan Page. We were escorted into the OnStar boardroom where they served us a delicious sampling of food and refreshments.

OnStar’s Jim Kobus provided us with an informative tour of the facilities including the patent wall, the historic service timeline and the recording studio but the most interesting portion of the tour was the large screens being monitored behind glass. One screen displayed a North American map with dots heavily dispersed in the eastern portion of the USA. Stats explained that each of the dots represented OnStar interactions for the day. 64,407 people had pressed their blue OnStar button in their vehicles, 1,872 people had pressed the emergency button, and there had been 87 instances of an automatic crash response where sensors informed an advisor to request immediate emergency reaction. 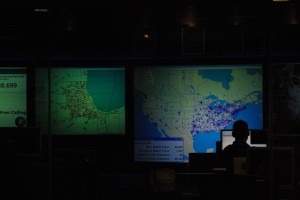 OnStar determines which emergency teams to contact based on the vehicle location.

Amber Alerts and weather are also monitored. If a subscriber contacts an advisor when either alert is active, OnStar provides subscribers with the Amber Alert details and warns of potentially dangerous weather ahead. When an area is affected by natural disasters, OnStar evaluates and shares the best evacuation routes.

In older OnStar equipped vehicles, emergency response would be dispatched with airbag deployment. Since 2009, sensors located on the vehicle can provide more detailed reports about the severity of the accident. The advisors may check in with you during a fender bender, even when the airbag does not deploy.

The new feature I wish I could try is the Turn-by-Turn Navigation. I had an older version in the past but I found the auditory recorded directions difficult to follow. Now directions are downloaded and displayed on your car’s navigation system. Key for a visual person like me! (Know of any inexpensive vehicle upgrade programs? Preferably for a new Buick?)

Two additional OnStar features I learned about were the diagnostic check and the stolen vehicle slowdown. I didn’t realize that when my engine light was on last month, I could have called OnStar and asked them to run a computer diagnosis to tell me why I needed service. If it had been a loose gas cap (it wasn’t), the diagnosis could have saved a trip and expense of a mechanic visit. 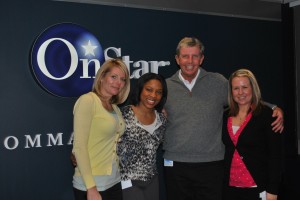 If your car is stolen and you have OnStar, they can direct the police to the location of your vehicle! In some 2009 and later vehicles, once authorities find the stolen vehicle, they can request OnStar slow it down which could make dangerous police chases a problem of the past.

Thanks to Kameya Shows for the invitation! Also to Stacy Vick, Jen Todd and Jim Kobus for their hospitality.