You are here: Home / Canada / Shoulders 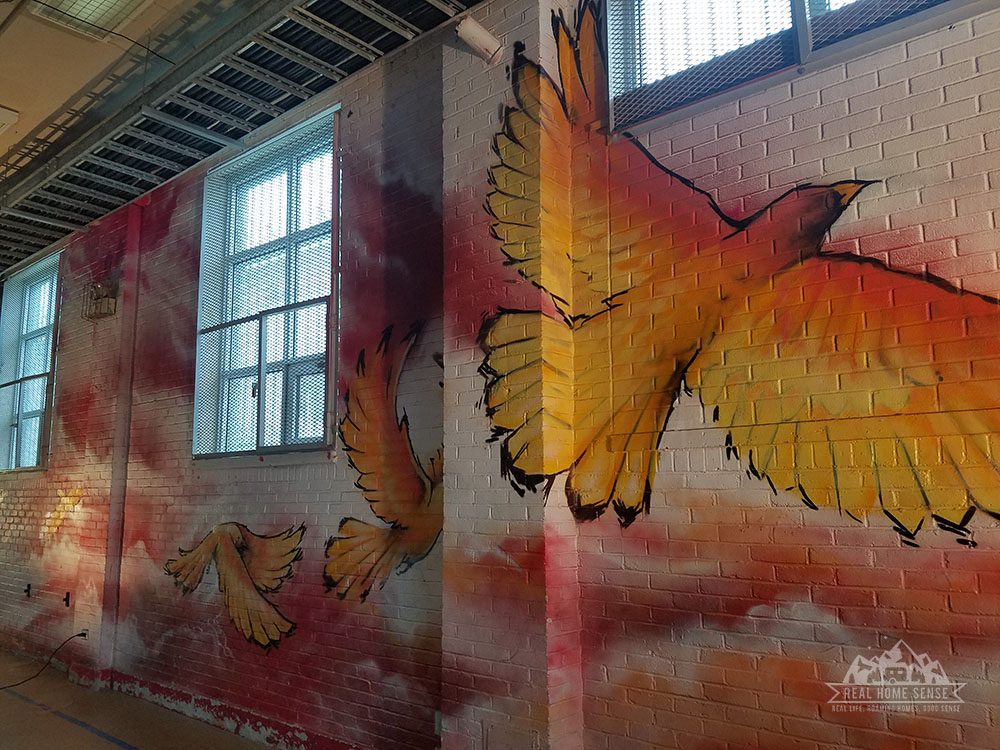 “Take off your shirt.”

I looked at him in disbelief.

“You take off yours, I’ll take off mine.”

I scrutinized the number of people in the room… I’ve always been a shy person, and even at 20, there was no way I was stripping down in a sports bar full of men, especially since I was the bartender, and the bar is the focal point in the room.

He wanted mine as much as I wanted his, maybe more, “How about you take off yours, and I’ll go into the bathroom.”

My shirt was a blue polo that proudly proclaimed I was Staff at the Portsmouth Tavern on the upper left chest. Nestled between the words was an anchor. His was a heavy wool sweater with a “Corrections Canada” label stitched in an arch on each shoulder. A successful exchange for both of us.

I looked out the front door of the Ports at the west wall of the Kingston Maximum Security Penitentiary. The narrow end of Portsmouth Harbour and a parking lot were all sat between the castle-like guard tower upon the long limestone wall and the pub I was standing in.

The Portsmouth Tavern opened its doors in 1863, only 30 years after they started construction on the neighboring penitentiary, and I was the first female to work at the pub – ever.

I’d lived and worked in the shadow of Kingston Penitentiary for many years, but Corrections Canada’s shadow stretched even further into my life. I wanted his shirt as a souvenir, and he wanted mine for a similar reason. The Portsmouth Tavern was a regular part of his life, just as the penitentiary was in mine.

I was sure our exchange was not the first, nor last time, individuals from each of the two communities intertwined, both familiar, and yet completely different.

My Grandfather’s career began at the now-closed British Columbia Penitentiary in New Westminster. It was the first federal penal institution west of Manitoba. He had been trained to work in an engine room of a mine sweeper in WWII. Those skills transferred to the boiler room of the BC Pen while, with four children at home, he worked nights towards his engineering degree. Once graduated, he accepted a position as the Works Officer at William Head Institution on Vancouver Island, where he helped transform the oceanfront location from a shipping quarantine station into a minimum-security prison.

The whole family lived on the prison grounds for several years, until 1965, when he began a new career in Kingston, Ontario, as Director of Works at Regional Headquarters. Regional Headquarters was located just down from KP on a beautiful piece of Lake Ontario waterfront. He worked there until his retirement. A successful career that went from an engine room to a head office.

Kingston Penitentiary was part of his responsibilities, as was every other prison in Ontario. As a young adult, I pleaded with him to take me into KP for a tour… I wanted to know what it was like inside. He’d just shake his head and tell me it was no place for a girl. Of course, this was the same Grandpa who told me I was no longer allowed to wrestle with boys after I turned twelve. He never told me why, and although I didn’t agree with him, I knew he was trying to protect me from things I didn’t fully understand.

He was tight-lipped about stories from the Big House, he never shared any specifics with me, so most of what I heard about KP came from guards I knew, or the bar.

My grandfather was working at Regional Headquarters during the riot of 1971 when inmates took control of the dome and cellblocks for 4 days. Their first order of business was smashing a bell that rang throughout the day, every day, to keep the prisoners on schedule. The armory in the center didn’t exist at that time, and they took six guards hostage. None of the guards were killed but they did get into a segregated cellblock where the “diddlers” and “hounds” were housed and let them out. There is good reason the management does not mix pedophiles & rapists with the general population; two of those 14 inmates were killed by their cohabiters. They are considered the lowest of low, even within the prison hierarchy. 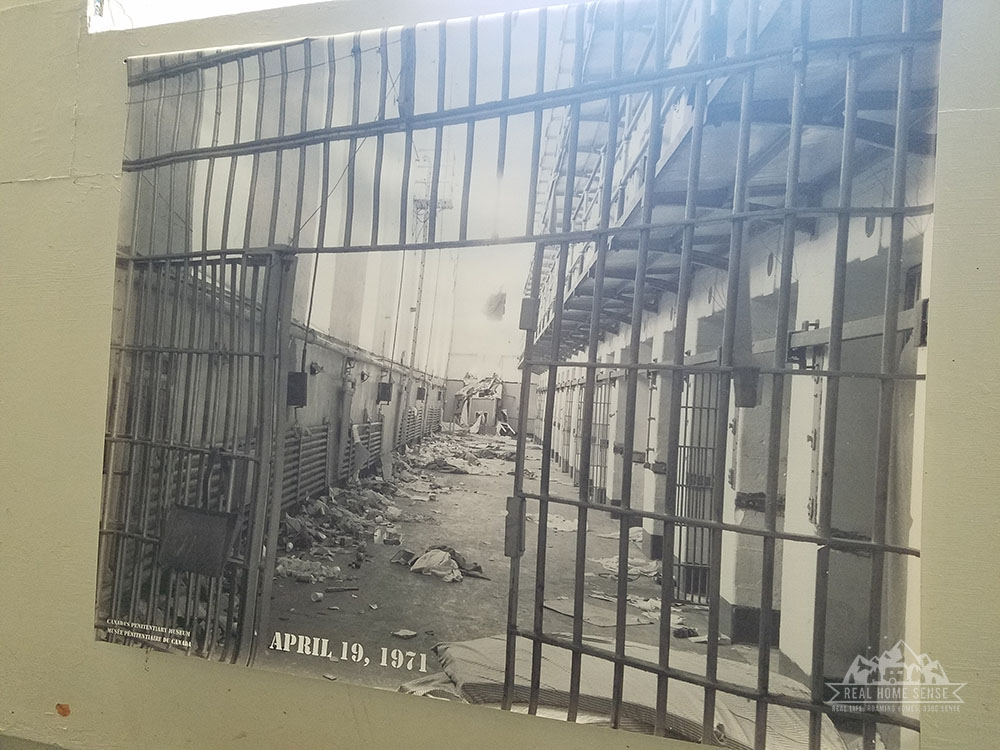 The 1970s riot was the last time the inmates took control of their environment and they never made it outside of the building. The event resulted in changes to their quality of life inside. The pen had become overcrowded and staffing was an issue; the inmates complained they weren’t getting enough exercise time nor enough work and, as a result, they were spending too much time in their cells. The riot spurred Corrections Canada to establish sub-committees to investigate prisoner complaints and instead of 1 hour of fresh air and exercise, inmates now have two. Millhaven Maximum Security Penitentiary had been built 15 miles away, but not yet opened, and 400 inmates were moved following the riot to provide relief on the overcrowding issue.

Two other major riots occurred over the 178-year history of this landmark. The first one was in 1932, lasted 6 days, and the unrest was eventually determined to be the forbidden use of tobacco. A riot also broke out in August of 1954 when a fire was set in the Workshop buildings and resulted in 2 million dollars in damage after only 2 hours. An escape attempt was thwarted and 50 of the 400 rioting prisoners went to solitary confinement. A bitter end to this riot for prisoners and the building itself but successful management of a challenging situation by the guards.

Prisoners are often considered the discarded, the forgotten. They are behind bars because they can’t function within society and follow the rules, but ultimately, the incarcerated are in prison to be rehabilitated and, ideally, returned to society. How they interact during their confinement plays a part in their appeals for release.

Kingston Penitentiary has a school in a wing of the workshop building. Its purpose was to ensure inmates acquired their high school diplomas and continued their education should they choose. If you know someone who got their college degree from Asheron College, they earned it while behind bars.

Kingston Collegiate & Vocational Institute (KCVI), is the high school I attended for nearly 4 years. A few years before the prison closed down, they painted the classrooms & hall to match KCVI colors.

Management hoped the psychology of the colors had something to do with the unusual number of successful Canadians who hailed from my local high school.

“A number of people of note have graced the halls throughout its history, including: Sir John A. Macdonald (Canada’s first prime minister), Oliver Mowat (politician), Peter Milliken (Speaker of the House of Commons and head boy at KC, 1963-64), Hugh Dillon (CBC actor and musician), Simon Whitfield (Olympic gold and silver medallist), Robert Mundell (Nobel laureate and father of the ‘Euro’) and Diane MacMillan Polley (actor and mother of Sarah Polley, Canadian actor and producer. Diane was head girl at KC, 1953-54). Last but certainly not the least of celebrated KC alumni are the recently named members to the Order of Canada, the iconic Canadian band The Tragically Hip.”

Excerpt from the Whig newspaper article written for a 2017 reunion that I did not make it to, unfortunately. I attended school with Hugh Dillon and The Tragically Hip, as well as many other classmates who are successful in their own right.

Society has a preconceived notion of success that almost always involves notoriety and wealth. We didn’t know our classmates would go onto become famous, we all put our pants on the same way. What if a big house, multiple cars, and money to blow, isn’t a priority for you? We don’t have to accept society’s general definition. The inmates who cleaned up their lives are a success, the guards who managed to do their jobs and not be tainted by the negativity are a success, and for some people just getting out of bed to face the day is a win of tantamount proportions.

Only you can determine if you are a success or not. You decide what you want to aspire to, and if painting your surroundings sage green and sunshine yellow helps, then by all means set the stage for your success. And remember, you can always re-evaluate and re-define. If inmates can set and achieve goals in prison, then we surely can too. You are only one goal away from your next success.

There is one ingredient of triumph that’s consistent, no matter how you define your achievements. Community. Whether it’s a clique, a family, a neighborhood or a prison, the people you surround yourself with, are usually the ones who challenge you to evolve. Motivation can arrive as either a kick or a kiss. Either way, you’re being lifted onto the shoulders of others, take in the view, and celebrate your success.

Pictures are from my recent visit to Kingston Penitentiary. It officially closed in 2013 and is now an historical landmark. If you’d like to learn more about its long and storied history, or want to plan your tour, check out my blog post over on CanadianaConnection.com. You’ll find lots of pictures & details I did not share here.