You are here: Home / USA / Michigan / Commerce, MI / Should Independent Thinking be a Punishable Crime?

Earlier this week I received the following email from the high school my children attend:

A disciplinary action has been assigned to “Name”.

The offense was Improper Use of Dist Technolog. This offense happened on 01/04/2010.

The staff member who referred your student was “Name”

The action taken was Before/After School Detention. “Name” must serve the action on 01/04/2010.

Our goal, through progressive discipline, is to change behaviors to create
the safest possible atmosphere for teaching and learning. Consequences
escalate with frequency of infractions. We appreciate your support.

Typically my first instinct is to support the school but I was irritated by this obvious form letter for three reasons:

I sent the following email off to the school:

Yes, I have a few questions:

1) How was he using the technology improperly? If it was an inappropriate
web site, what was it?
2) who are all the people you’ve CC’d and what are their roles in this
infraction?
3) what time will I need to pick him up tonight since I’m assuming he’ll
miss the bus?

Thank you in advance for your reply.

…and got the following reply…

Hello Mrs. Williams,
“Name” downloaded unauthorized information to the H drive of his computer. In
the beginning of school year the administrative team informed all students
of the expectations regarding computer use. The computer teachers also
reiterated these expectations to the students as well.
“Name” downloaded unauthorized software which was flagged by the district
systems operator and “Name’s” computer access was denied. This infraction
initially warranted a suspension since the expectations had been previously
established. However, in an effort to work with “Name” I have reduced it to
an after school detention and instructed “Name” to remove the software. Today
is an early release day for the district and detention is over at 3:30. If
you have any other questions please do not hesitate to contact me. The
previous email was generated by the Skyward program which informs the
attendance secretaries and counselor f any disciplinary action that was
taken regarding “Name”.

Note she didn’t say what the unauthorized software was. My assumption was that it was a game but it wasn’t, he downloaded Firefox.

So my son could have potentially been suspended for being intelligent and technologically savvy enough to realize that he could get his school work completed faster if he downloaded a better browser. On top of that, he assumed it was legal because he had seen the browser on other school computers.

Give the kid a flipping medal! Praise him for being a thinker instead of a follower! You can bet your bippy if he had been suspended for this, the school would have an irate parent in the office.

Judging by the response to my tweet and facebook status, I’m not the only one who thought my son was brilliant: 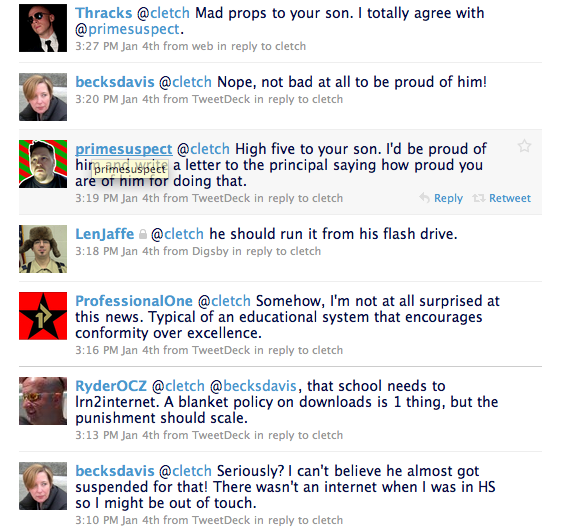 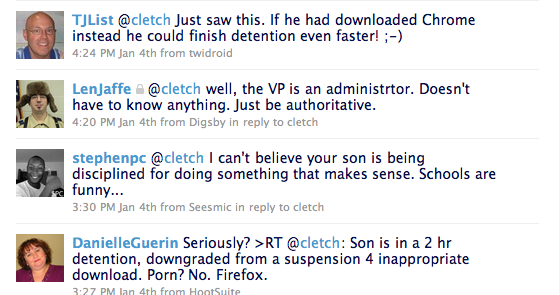 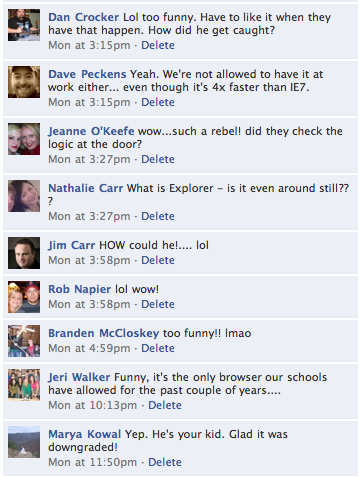 Do I think he should have been punished? No. On the other hand I understand that the school has a lot of kids to manage and the rules are in place for a reason. I also understand that if they make an exception for one child, they are pushed to make other more questionable exceptions.

But @RyanMeray makes a good point:

If they can control the type of downloads the kids can make, why don’t they? Is it too overwhelming to differentiate between what’s allowed and what isn’t? I don’t understand the system or the process well enough to make a judgement, so in the meantime, I’ll give the school the benefit of the doubt.

My irritation was raised another notch when I discovered it wasn’t just my son that received the downgrade from suspension to detention. The reality of the situation was there were lines of kids waiting outside the Vice Principal’s office the first couple of days back to school. The offense did NOT happen on 01/04/10 as the letter stated. It occurred prior to Christmas break, the school personnel must have created a mass round up of offenders while the kids were out enjoying their family time.

I am further infuriated that I was led, via the letter above, to believe this was a special concession made for my son because they determined the punishment needed to be downgraded. The truth was much more self-serving than that. Can you imagine if they had suspended all the students accused?

Dear Walled Lake School – you have my support.

If you’d like to continue to receive it, try using some honesty and common sense and let me know the reality of the situation rather than leaving out information. As a parent, I have the right to know the entire truth, not just what you choose to feed me to cover your own butts.

My other son has a detention tonight. He downloaded a game onto the school computer and deserves it.

I want both my children to be raised as independent thinkers who look at every situation and try to find new solutions or improvements. These are the types of people who will be the movers and shakers of our future.

The people who learn to mindlessly follow rules without questioning their validity? Well, it seems some of them end up in the school system.

Photo Credit:http://www.flickr.com/photos/travosaurus/ / CC BY-NC 2.0
Previous Post: « I Am Woman, Hear Me Roar
Next Post: Doing Less for Self Care »