You are here: Home / Real Home Sense / The Sticky Floor / Riding the Bull: Recognizing When Resolution isn’t the Game

The tensions mount as you stare eye to eye trying to come to some sort of understanding. Breathing is getting heavier, blood pressure is rising, and you realize this discussion is not going to be easy. 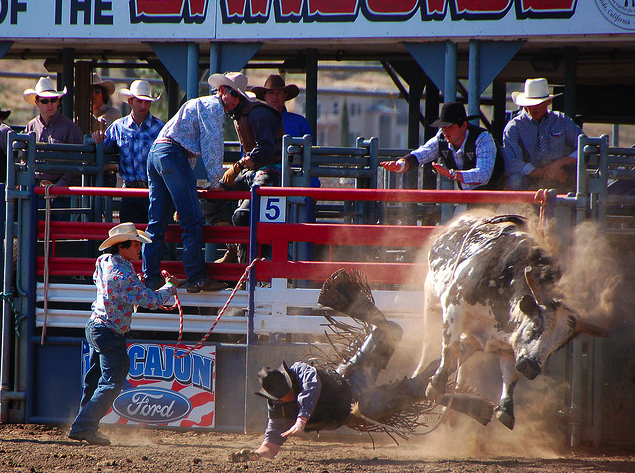 Whether it’s a coworker, family or friend, you probably know a bull but don’t recognize it as such. You may even be the bull!

Here are three tell-tale signs you’re dealing with a bull:

If any of those points ring true for you, you’re dealing with an intelligent bull. The bull doesn’t want to be challenged, it just wants to live life as it chooses regardless of how it affects you. The bull wants you to give up because it doesn’t want to accept any responsibility for it’s own behavior.

Find the sweet spot on the bull’s back and bear down to keep the discussion on topic with these successful bull riding tips:

The bull’s entire purpose is to get you off it’s back.
By remaining calm, respectful and firmly on topic, the bull will be forced to hear and respond to your point of view. If you’re dealing with a true fighting bull, the ride is not going to be easy, particularly if you’ve enabled the success of its techniques in the past.

When bull riding, injuries and subsequent scars are inevitable. There may come a time when you begin to evaluate the possibility of bailing out of the situation. Determine if the constant challenge is worth the reward; because even champions eventually retire.

When you’re on that bull, eight seconds is a lifetime.