You are here: Home / Featured / Life is a Parade!

“Life is like a parade, and it’s one that most people watch go by. And then there are some that get in that parade.”
~ Jonathan Goldsmith

If you know me at all, you’ll understand that I live for road trips. I feel most alive when exploring something I’ve never seen before.

A decade ago, our family took a road trip from Columbus, Ohio to New Orleans that included stops in Nashville and Memphis. This year, I planned to meet a friend in Nashville and based on the weather, travel somewhere warm and sunny. He wanted to go to New Orleans. I wasn’t overly excited about a repeat trip to this location, then realized we’d arrive in time to catch the last few days of Carnival and Mardi Gras.

Did you know that Mardi Gras only refers to Fat Tuesday, the day before Ash Wednesday? I didn’t. The celebrations begin two weeks prior and are the period of time referred to as “Carnival,” or Mardi Gras season.

Driving by the seat of our pants, we arrived in New Orleans with a general plan… go to the Garden District and find a Bed & Breakfast to stay in. With the GPS directing us, we found ourselves right in the middle of the crazy festivities on the pedestrian side of the parade St. Charles Avenue route!

After many wrong turns and two hours of driving in circles, we gave up on the bed & breakfast, parked the car and wandered into the throngs of people.

Thanks to a friendly Texan who had reserved space at the front of the parade route, 10 hours prior, we eventually ended up with a front row view of the last half of the day’s final parade.

What a wild time that was as two story floats passed a mere couple of feet from where I stood. Costumed revelers tossed beads to us as they passed. 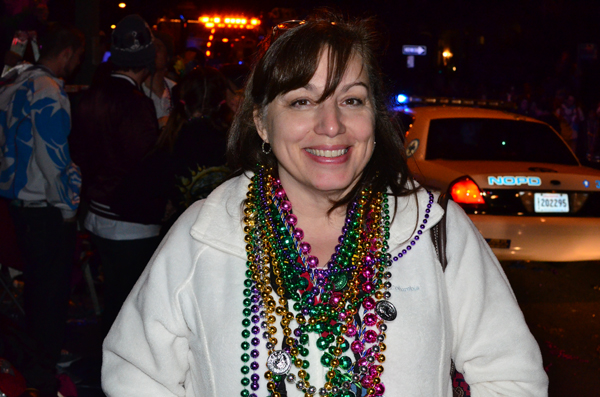