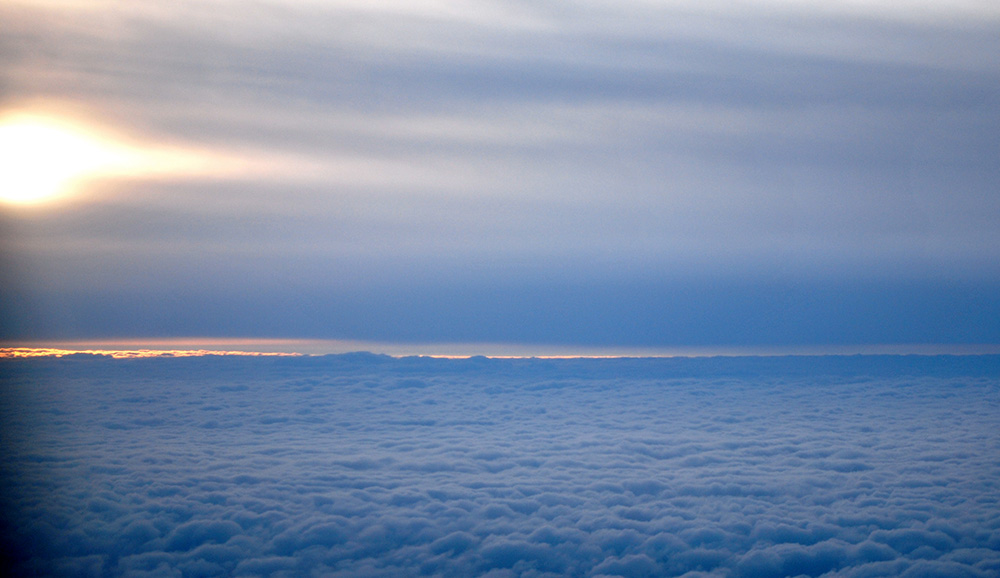 There is such beauty in watching the early morning sun sweep silently across the top of the light full white clouds. Golden colors of yellow and pink creep towards the small airplane I’m sitting in. The scene is appreciated all the more because this is a view I’ve rarely seen.

I’m serene and realize the fear is completely gone.

I flew for the first time when I was 16. My grandparents were spending winters in Florida and sent for me to visit them. There was the slight trepidation that typically accompanies something new, but it wasn’t fear.

It wasn’t until my children were born that I developed anxiety around flying. It always began the day before and didn’t end until I was safe at the gate. I knew the intensity of the fear was unrealistic while at the same time my heart felt as though it were going to explode, especially during any takeoff and landing. My love of travel won over my fears but it was a hard-fought battle.

I realized the impending sense of doom that filled my every pore, was related to having babies. A physical response that had no business stressing me out in these modern times. My body was telling me I no longer was only responsible for myself, I was responsible for two small beings whose survival depended on mine.

Yesterday, I felt similar trepidation. My eldest got his driver’s license last week. We made plans for him to drive me to the airport before school. This way he’d be able to use my car to get to and from his new job while I was out of town. I was fine until I realized after he dropped me off, he’d have to drive 45 minutes on the freeway and may meet the morning rush hour head-on. He brought his younger brother along for moral support and GPS management.

I called them from the gate; they’d made it back to our area and were exiting the freeway. Relief. They’re growing up and able to be responsible for their own destiny.

For the first time in 17 years, take off was a breeze.

Previous Post: « Busyness as a Badge of Honor aka Who Made You Sheriff?
Next Post: New York November »