You are here: Home / Roaming Homes / Campground / Blanco State Park: A River Runs Through It 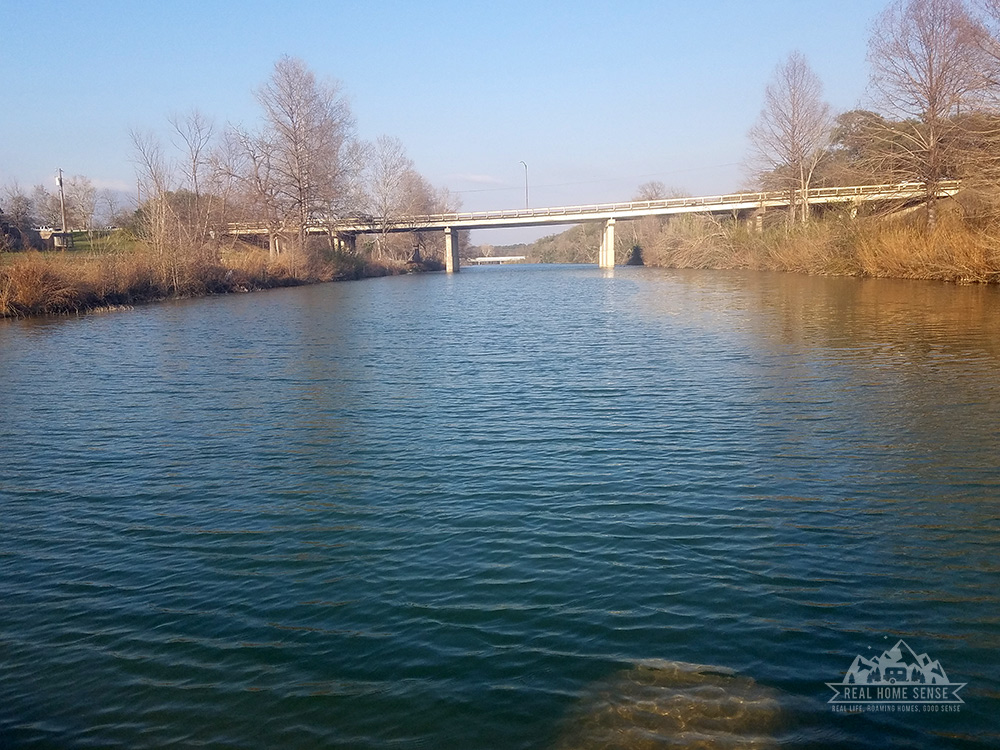 Rivers weave in and out of hills and rocks or they flow straight, the water slowly making its way past mud banks, forests, and communities. They sparkle in the sunlight while birds fly above and fish dance below their surface. They provide food to eat, water to drink and cool us off from the hot sun on a scorching summer day. We lay on the banks looking up to the blue sky and think “this is what life is all about!” The beauty, the comfort, the happiness. But the reality is, we can’t truly appreciate the relaxation of a warm summer day along the banks of the sparkling river if we didn’t also know hunger and hardship. What the river gives, it can also take away.

Blanco State Park is located in the city of Blanco, Texas, in the county of Blanco, along the Blanco River. You probably get the idea of how important the river is to this area as it lazily runs through the 104-acre state park, which is situated on the southern edge of the city of Blanco.

I chose to stay here because of its 50-mile proximity to San Antonio, my next stop. I was just looking for a place to land so I could work uninterrupted, and hopefully, a place to exercise my legs when I took a break.

I checked in with the ranger station and began to follow their instructions to my home for the week. It’s not a big park, it would be difficult to get lost. It straddles both sides of the river and the campsites were located on the other side. I took the first right and momentarily ran parallel to the river; the immediate left would take me across a bridge that was almost level with the river…. a slight increase in the water levels and the road would disappear.

When my children were small, I had a recurring nightmare that we’d be in my car, me in the driver’s seat, them snug in their boosters in the back seat, when I’d see a wall of water coming at us sideways. I’d wake up heavy with dread, knowing we’d only escaped the dream.

I prayed there wouldn’t be a flash flood as I crossed. I took a deep breath, the clear blue sky pushing me courageously across a bridge built for one car at a time.

I pressed harder on the gas to pull the trailer up the other side into a small group of campsites, more full than not.

I drove the loop until I came to my site; I was going to have to back up.

I did my best to line up and began to back in… I must have looked concerned because my next-door neighbor stuck her head out of her trailer and asked, “Would you like me to send my husband to help you?”

He expertly guided me into my spot, so my slides had room to open.

I loved that little campsite under the canopy of trees with its covered picnic table and view of what I initially thought was a paddock of goats.

On closer inspection, they were sheared sheep. Maybe I ought to get my eyes checked.

The campground ended up being perfect for what I needed it for. A micro-community that I could appreciate on my breaks from catching up at work. Initially, it felt too easy to walk the entire 1-mile length of the park on both banks of the river when I needed to stretch my legs and clear my mind, so I was a little disappointed. The park was too small for my exercise needs and I did not want to travel too far from my desk to get a change of scenery. It only took a day or two for me to be drawn into the simplistic beauty.

I’d walk it at least twice a day as I worked out client problems in my head and I began to enjoy the repetitiveness of my daily regime. There were little surprises I found and reveled in every time I saw them. I actually began to look forward to seeing them again and again. 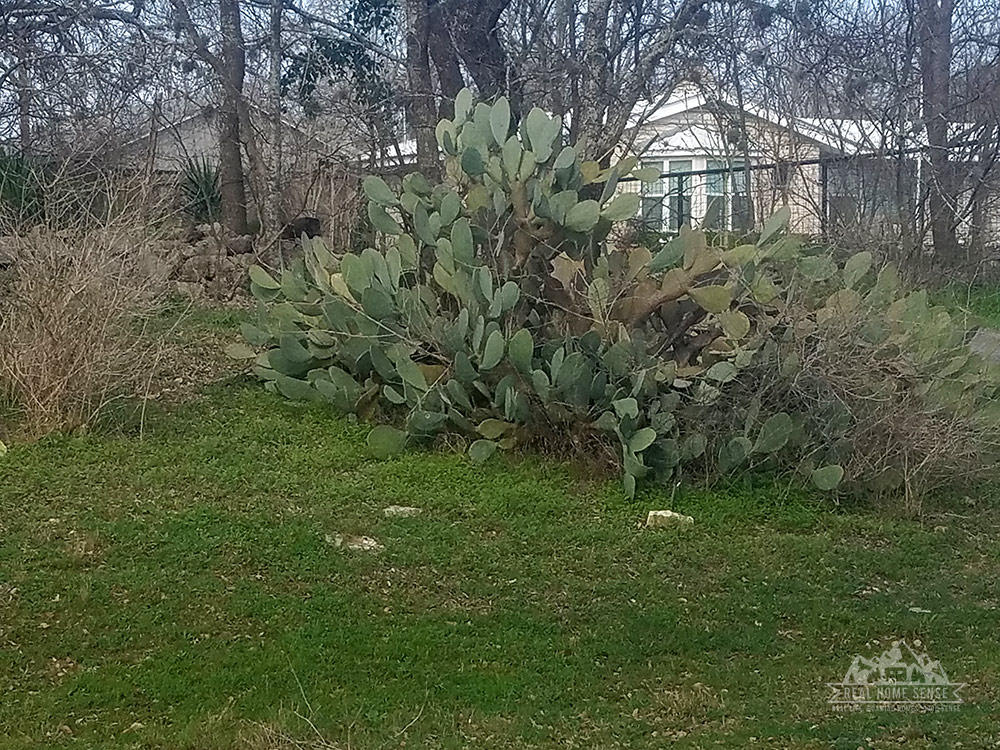 It was the first time I saw cacti growing in people’s yards, and every time I passed the giant stone picnic table I’d envision the cast of Game of Thrones sharing a meal around it. 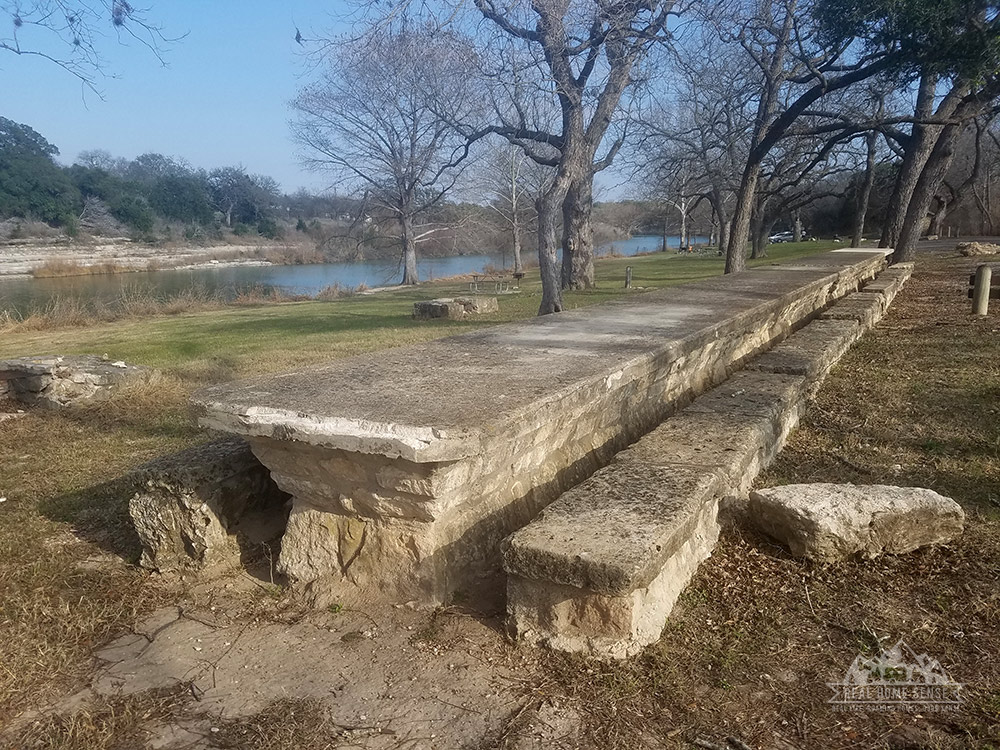 The table was built by the Civilian Corp of Engineers (CCC) in the early 30’s, as were the dams which formed a series of tiered pools for the swimmers, tubers, and fishermen who were completely unaware they entertained me because it was fun to see who was doing what. 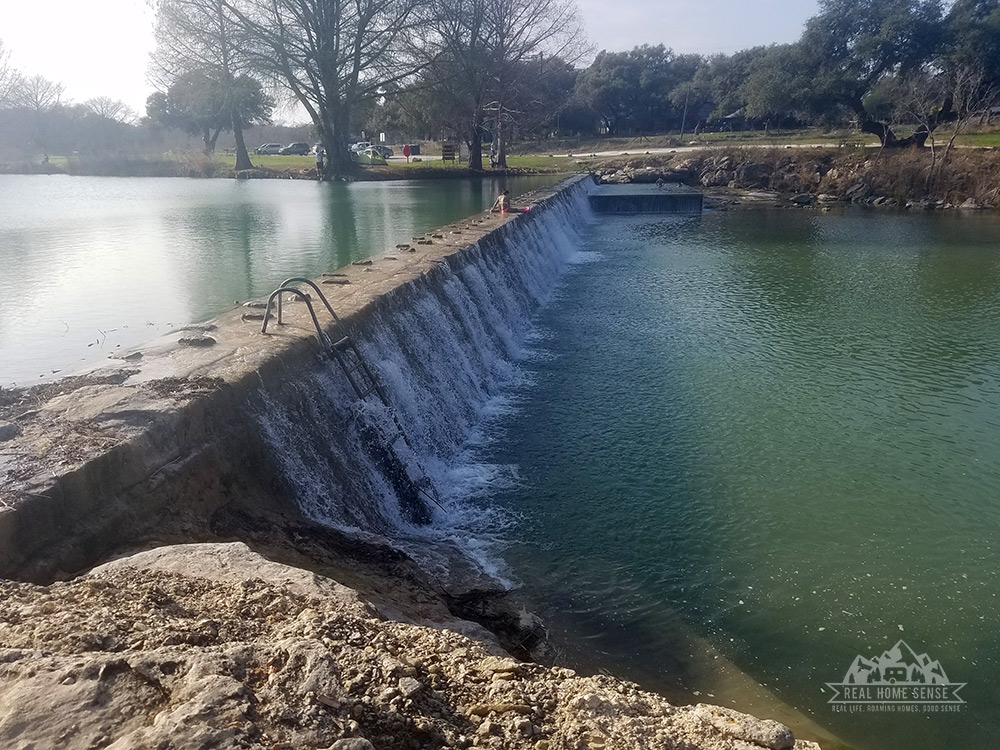 I’m not sure how I missed the metal gate the first few days, but I did. 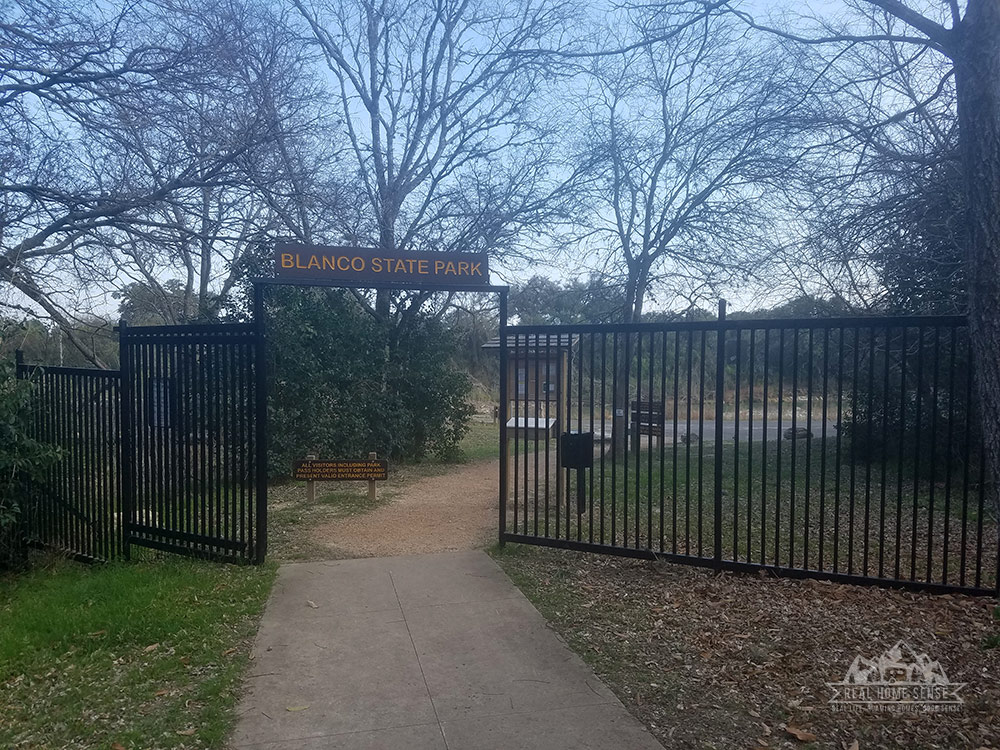 When I found it and followed the path through the gate, a whole new world opened up before my eyes. This proverbial rabbit hole led me to a scene reminiscent of a historical novel…

The Old Blanco County Courthouse stands grandly in the center of a town square surrounded by shops facing its green space.

Opened in 1886, the building served its original purpose only until 1890. Over the successive years, it functioned as a school, office buildings, and hospital among other uses. It wasn’t until a buyer planned to disassemble and move the building out of Blanco that residents decided it was a building worth saving. Not only did they keep the building where it stands today, they restored it and it was designated historic in 1972. It now has multiple community uses, including tours. Now the star of Blanco; the interior had a supporting role in the 2010 movie, True Grit.

I tried a few restaurants on the square, The Bean & Biscuit Coffee House and Bakery was a nice surprise, since I was also able to purchase some gluten-free treats.

The Oak Creek Cafe was disappointing both in service and food quality. It appears they’ve since closed. I didn’t get a chance to try all the restaurants on the square but if you consider yourself a foodie, Old 300 BBQ ribs are not to be missed.

Charged by weight, my eyes were much bigger than my stomach; I ate the meaty ribs for days. I recommend you go early because they ran out.

Word of the deliciousness has traveled all the way to DC where their creator, Ladd Pepper, was tapped to serve his ribs during President Obama’s inauguration.

The city of Blanco derived its name from the Blanco River, which in turn, was named for its white limestone shores. The river is shallow for most of its 87-mile eastward trek. The spring-fed body of water looks unassuming during my visit but I can tell those same banks have been submerged. In May 2015, during a wet spring, the Blanco River surprised the community when its water rose over 30 feet in a short period of time, washing away trees, bridges, houses, and stealing lives as it moved downstream. Seeing it on a beautiful day makes it hard to reconcile the darker side of the river.  I may have heard ghostly whispers the day I crossed hesitantly for the first time, but more likely, my subconscious saw the debris field high in the trees days before my conscious mind acknowledged it.

The river is a natural metaphor for the juxtaposition of good and bad, fair and unfair, the positive and negative in our lives. Perhaps I wouldn’t have appreciated the ribs as much if I hadn’t had disappointing food across the square. Perhaps the people of Blanco didn’t understand how important the old courthouse was to them until someone planned to take it away.  I didn’t expect to love this tiny little state park as much as I did, and I may not have begun this nomadic lifestyle if I hadn’t been housebound, and mostly alone, for so many years with two young babies.

What we choose in our lives is so often the result of having experienced extremes, and once the flood has receded, it’s up to us to decide whether we’re going to continue to live our days focused on the periods where we thought we were drowning, or whether we’re going be proactive, invest in some sandbags, and then lay back on the banks to revel in the glory of another blue sky day.